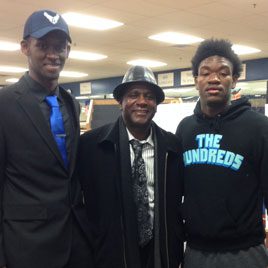 Austin Donaldson of Jonesboro High School and Nicolas Wells of Walton High School played at an elite level this past spring and summer with The Douglas Brothers Elite. The players showed that they are some of Georgia’s top players. Point Guard-Austin Donaldson maybe the best point guard in Georgia. He is in the running for Georgia Mr. Basketball. Donaldson has great size, can score and a plays great defense. He is an unselfish player that led Jonesboro High to a 4-A State Championship in 2014. Donaldson has signed to play with University of Tennessee Chattanooga and he will play for the MOCS and Coach Wade. Nicolas Wells has signed with Air force Academy. Wells has much upsize and potential. He is a big sleeper in Georgia. He played very well this past spring and summer. Wells is a 2-3 who is long and athletic with untapped potential.

Coach Douglas stated both schools are getting two great young men, which are two of the finest athletes he has coached. Donaldson and Wells both carry a 3.7 GPA and scored well on the SAT. They are truly student athletes and role models for the next generation of children, stated Coach Douglas.